Most of my computer life of the last few years has lived within Dropbox. It's proven to be a very hands off largely no-thought means of ensuring the 3 Windows computers I use regularly at work and home all have almost identical tool chains and environments. It's always bugged me though, that my "home" is buried under C:\Users\matt\Dropbox (though at least with Win7 it's not under that horrible "Documents and Settings" folder!). Way too freakin much typing just to get to the point of starting work, or fun.

I've tried several methods for making this more livable, and each succeeds to a certain extent -- though none come close to matching what we had 20 years ago with the Amiga.

Move Dropbox to root of C:

yech. user data on same partition as operating system. never been comfortable with this. I want OS and Programs over [there], my docs and stuff [here], and easily wipe or restore one without touching the other.

Open a command shell, fire off net use B: \\localhost\c$\users\%username%\Dropbox /persistent:yes.

(So nice that A: and B: almost never exist anymore, and are thus available, even when joined to a domain.)

Worked swimmingly well for several months, until learning that the mysterious Mecurial and Bazaar lock errors I would encounter at seemingly random occasions and took hours to get out of were due to timing issues in the underlying network transport protocols, even though everything was happening on the local machine and darn fast, to human perception.

Also can't use any commands requiring elevated privileges because "B:" isn't available to Administrator. (why o why doesn't Windows have sudo??)

An effective cure for the timing issues noted previously. Suffers from lack of sudo, which has been real problem while trying to work on improving Leo and Osgeo4w install packages.

The Dropbox app steadfastly refuses to use a bare drive as it's home, and insists on creating a folder called Dropbox where you point it. If you run a client older than 1.6 or so, before the database was encrypted, it is possible to open the config.db file in an sqlite3 aware db program and change the folder name manually, including to a bare drive letter.

There are some features lost with this, plus you'll also be syncing the Recycle Bin and System Volume Information, which could cause other issues.

Finally, yesterday, I hit open the best possible solution short of the Amiga's Second Coming: create a separate partition and volume and instead of assigning it a drive letter mount it to an empty NTFS folder, and then subst that.

For extra flourish, size the volume to your Dropbox limit. Doing so you always know at a glance how close you are to your quota. (Good idea to make it 15% than actual quota for breathing room. It's enough space to defrag, and Windows will get markedly slower on volumes with less free board.) 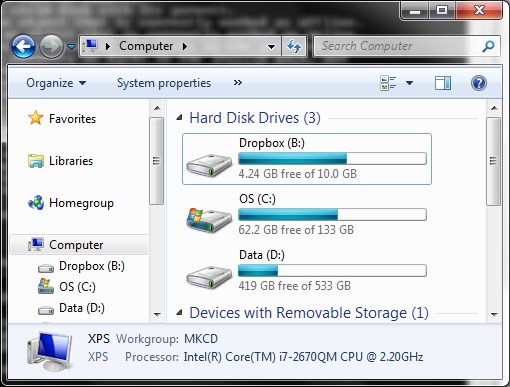